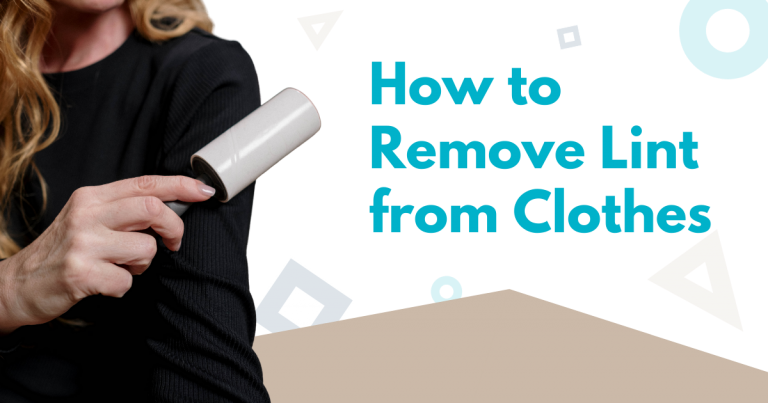 When you are choosing your OOTD (outfit of the day), it’s never an easy task to make up your mind immediately as to what to wear that will perfectly express how you feel today. So you go through the process of trying clothes then donning them off, and that process repeats.

And once you have found your perfect outfit, and just when you thought everything is finally beginning to fall into place, you realize the perfect skirt, and the sweater is covered with lint. So all those times spent in putting that perfect pair together all come going down the drain.

Well, today, we will be discussing how to remove lint from clothes effectively using ordinary things you can find inside your home. We made sure that the different ways we will be showing you are safe and cost-efficient.

Before we learn how to remove lint from clothes, we will first know what exactly lint is.

What Is Lint Made Of

Lint can be described as small soft pieces of wool, cotton, etc., that stick on the surface of the cloth. Basically, they are the small, irritating fibers that stick to your clothes and are quite hard to remove. The worst part is, they are often small but large in numbers, making it impossible for you just manually to pluck them out using your hands.

Lint can also be classified as natural fibers like cotton, and wool can generate more lint than fabrics made of rayon or other synthetic materials. Because of friction, these fibers break off from your clothes; thus lint is formed.

Lint has a special way of catching you off guard, and they show up on clothes just when you need to head out the door. It’s like they know when to stick on your favorite jacket, and just like having minds of their own, they multiply, and before you know it, your whole plan to wear that precious jacket is ruined.

11 Ways to Remove Lint from Your Clothes

From ordinary objects you can easily find inside your house to lint brushes, here are 11 proven ways you can remove lint from clothes effectively.

This is a sure-fire way to remove all the annoying lint from your clothes effectively. You can easily buy quality lint rollers from supermarkets, and having them at home can really make a big difference. Just peel the wrapper off and roll it on the clothes you want to clean in an up and down motion. It’s effortless to use and very effective.

I have never been in a house without masking tape available. After all, it is quite a useful little piece of tape that can do a lot. And one of its features is removing lint. Yes, you’ve heard it right! Using the sticky part of the tape, you can pick up those small fibers in an instant because nothing can escape the stickiness of the masking tape.

Electric lint shavers are heaven-sent since they are very effective in removing lint from any clothes. They are basically razors made specifically for efficient lint removal. They are fast and straightforward to use. They come in a wide range of speed and blade sizes that you can choose from, depending on your needs. If you have an extra budget to spare, you can also get one of those sweater shavers that come with long cables and high-quality blade material.

This invention is something that has a lot of uses since it was first introduced in 1957. If you think velcros are just for sticking things together, then you’ll be in for a shock. Velcro can also be used to remove lint. Yes, you’ve read that right. And it’s effortless to use too.

Using the rough side of the velcro, the ones with the little hooks, all you need to do is to rub it on the lint-infested side of your clothes gently, and voila! It will be lint-free in no time. It’s that easy and is highly recommended since you can easily purchase or get velcro from the store.

A razor can be a man’s best friend, especially in the morning, if you want to look cleaner and younger. But these trusty razors are not just for removing your mustache or your beard. They can also be used to remove lint from clothes. And they have been used for years now. People have seen the razor’s awesome ability to get rid of lint and have used this hack ever since.

You must be aware that you have to take extra precautions when using something very sharp and careful. Not only can this cause you injury when not used with care, but it also can ruin your clothes. So make sure to do the process slowly and gently to avoid accidents.

Well, who would have guessed a sponge or a scouring pad can also be used to remove lint? This can be quite a shocker, but believe me, this method is very effective. Just like the velcro, a scouring pad’s roughness can easily take those lint particles away from your clothes without causing hassle. And a damp sponge is also equally effective as it can remove that lint like a pro. Just make sure to drench the sponge or the scourging pad first with water to soften it before you use them on your clothes.

You may not believe this, but the pumice stone you have in your bathroom that makes your skin smooth and more younger-looking can also be used to get rid of lint. So next time you see your sweaters and pants crawling with lint all over them, take that pumice stone out and rub that lint away. It’s effortless, and anyone can do it since it is very safe.

Lint brushes are quite effective and very easy to use. They are one of the cheap but quality lint removers you can find at the store. They are also very easy to hold, so they are recommended even for older users. Its ready-made handle can be gripped easily while you remove it to get rid of lint. Lint has no chance if you use this gadget correctly.

One additional quality lint brush that stands out from the rest is its capability to work across a wide variety of fabrics since you are basically brushing something down with a bunch of tiny rubber bristles. This is more effective than just using an ordinary brush to get rid of lint and pet hair.

A dryer sheet is a piece of fabric that you put inside your dryer to avoid static from building up inside your dryer from clothes rubbing against each other. And this dryer sheet technique is essential and very effective in preventing lint from accumulating. Lint is normally made when clothes are not separated correctly, and static electricity is caused by these clothes rubbing against each other, forming lint as they do so.

The clothes are made smoother with dryer sheets because of the fabric conditioner released when you incorporate these sheets into your laundry load. Therefore, if you want to not worry about lint production in your clothes, better use dryer sheets next time.

Who knew this simple glove could do wonders when it comes to lint removal? Yet this is exactly what rubber gloves can do. Aside from them protecting your hands from sharp or dirty objects when doing your gardening, you can also scrub the lint away with these rubber gloves.

This power to remove lint does not come from magic. It comes from static electricity build-up that picks up lint as you rub the gloves on your clothes. This is very easy to do, and gloves are very easy to attain since you can buy them almost anywhere.

When you have used and worn pantyhose, most people throw them in the trashcan and leave them forgotten. If you are suffering from lint accumulation, you can fashion up a glove on your hand and easily remove lint from clothes.

Not only does pantyhose or old nylon look good on whoever is wearing them, but they can also be used as an excellent glove in removing lint from hard-to-reach areas. Included in Reader’s Digest 23 Bizarre Uses for Pantyhose, this is not widely known or used. But it is equally effective.

Lint accumulation can be irritating and can cause a lot of hassle if left untreated. If you are tired of seeing these small fibers around your clothes and want them to stop, I really hope this article will help you. All you need to do is follow the instructions I have included here, and you can say goodbye to lint in no time!

Peggy is a contributor and editor at Tidy Diary. She is a proud mother of three children who inspired her to level up her tidying skills. She enjoys her me time by lounging in her favorite nook with a lovely cup of tea. She also keeps a handy diary.

Tidy Diary aims to teach its readers how to clean better. We believe that better cleaning doesn’t have to be time-consuming and exhausting. Rather, it should be as smart, simple, and painless as possible.